The Calculus of Consent Logical Foundations of Constitutional Democracy

By James M. Buchanan and
Gordon Tullock
Edited and with an Introduction by Charles K. Rowley

The Calculus of Consent, the second volume of Liberty Fund’s The Selected Works of Gordon Tullock, is a reprint edition of the ground-breaking economic classic written by two of the world’s preeminent economists—Gordon Tullock and Nobel Laureate James M. Buchanan. This book is a unique blend of economics and political science that helped create significant new subfields in each discipline respectively, namely, the public choice school and constitutional political economy. Charles K. Rowley, Duncan Black Professor of Economics at George Mason University, points out in his introduction, “The Calculus of Consent is, by a wide margin, the most widely cited publication of each coauthor and, by general agreement, their most important scientific contribution.”

The Calculus of Consent is divided into four parts, each consisting of several chapters. The introduction by Professor Rowley provides a short overview of the book and identifies key insights that permeated the bounds of economics and political science and created an enduring nexus between the two sciences. Part I of The Calculus of Consent establishes the conceptual framework of the book’s subject; part II defines the realm of social choice; part III applies the logic developed in part II to describe a range of decision-making rules, most notably, the rule of simple majority; and part IV explores the economics and ethics of democracy.

James M. Buchanan is an eminent economist who won the Alfred Nobel Memorial Prize in Economic Sciences in 1986 and is considered one of the greatest scholars of liberty of the twentieth century. He is also Professor Emeritus at George Mason and Virginia Tech Universities. 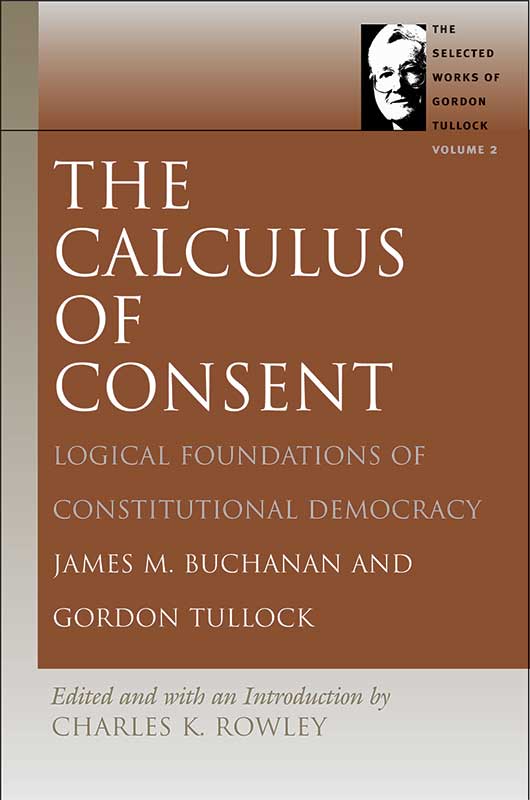