Selections from Three Works A Treatise on Laws and God the Lawgiver
A Defence of the Catholic and Apostolic Faith
A Work on the Three Theological Virtues: Faith, Hope, and Charity

By Francisco Suárez
Edited and with an Introduction by Thomas Pink

Francisco Suárez (1548–1617) was the greatest metaphysician and moral theorist of sixteenth- and seventeenth-century scholasticism. Suárez is of particular importance as a theorist of natural law and of rights, for his work combines expertise in moral theory with a mastery of civil and ecclesiastical jurisprudence and a sophisticated theory of the human person.

The bulk of the selections in this volume are from A Treatise on Laws and God the Lawgiver (1612), “one of the major works of scholastic moral and legal theory,” writes volume editor Thomas Pink. In the Treatise, working within the framework originally elaborated by Thomas Aquinas, Suárez presented a systematic account of human moral activity in all its dimensions, synthesizing the entire scholastic heritage of thinking on this topic and identifying the key issues of debate and the key authors who had formulated the different positions most incisively. Then he went beyond this heritage of authorities to present a new account of human moral action and its relationship to the law.

The second selection is from A Defence of the Catholic and Apostolic Faith (1613), a treatise on the errors of Anglicanism and, in particular, on the errors of King James I in relation to the power of the king in temporal matters and the power of the pope to intervene in the cause of religion. The selections in the final section, A Work on the Three Theological Virtues (1621), are taken from Suárez’s accounts of faith and love, and they concern the conversion of unbelievers and the conditions of a just war.

The translations in this volume were originally published by the Carnegie Endowment for International Peace. Now republished with a new introduction, revisions to some of the existing notes, and additional notes, these selections are again available in English for those interested in the ethical and metaphysical foundations of political authority and the right to liberty. The texts are of special interest to historians of religious liberty, toleration, and coercion as a classic account of the coercive authority in matters of faith and religious practice of the Catholic church.

Thomas Pink is Professor of Philosophy at King’s College London. Some of his publications include Free Will: A Very Short Introduction and The Will and Human Action: From Antiquity to the Present Day. 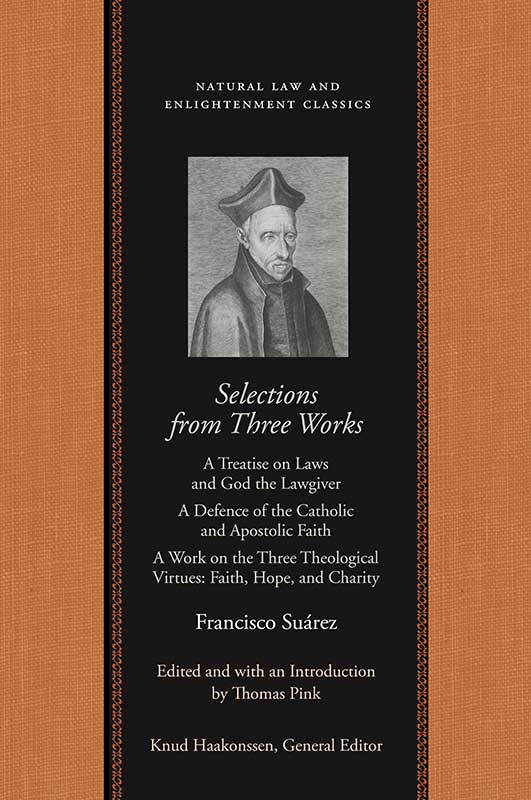 Introduction, note on translation (from the Carnegie edition), note on this edition, annotations, bibliography, suggestions for further reading, index.