Historical Law-Tracts The Fourth Edition with Additions and Corrections

Historical Law-Tracts is one of the earliest contributions to the Scottish Enlightenment project of a historical science of society. Henry Home, Lord Kames (1696–1782), was an influential Scottish judge, a prolific man of letters, and one of the leading figures of the Enlightenment in Scotland, and his goal in this work is to show the study of law as a genuinely scientific inquiry and not a mere collection of facts for the lawyer to memorize. He deployed a large range of ancient, medieval, and early-modern sources to trace the development of law and to explain that development in terms of interactions between principles of human nature and political, economic, and social circumstance. He applied this method in substantial and influential treatments of criminal law and the law of property and also to a diverse range of issues, specifically in Scots law. One of Kames’s principal objectives was to expose and discredit the continuing influence of feudal principles in eighteenth-century Scots law and, as such, Historical Law-Tracts can be read as a manifesto for a modern, commercial, Scotland. The work found an international readership as well, especially in America, where it was read as an object lesson in understanding the role of law in a free society.

In Historical Law-Tracts, Kames combined the natural law framework that underlies his Essays on the Principles of Morality and Natural Religion with the “conjectural,” or philosophical, approach to history that would receive its fullest treatment in his Sketches of the History of Man to offer a history of law as a history of the progress of mankind from savage to civil society.

The Liberty Fund edition supplements Kames’s original text with a new introduction providing historical context and biographical information, expansion of Kames’s footnotes to explain the often rather obscure system of reference used in the book, translation of the Latin passages, and explanatory annotations relating to important changes that Kames made to the text, including variant readings from earlier editions.

James A. Harris is Professor of the History of Philosophy at the University of St. Andrews, Scotland. He is the author of Hume: An Intellectual Biography and Of Liberty and Necessity: The Free Will Debate in Eighteenth-Century British Philosophy. He is the editor of the Liberty Fund edition of Kames’s Sketches of the History of Man. 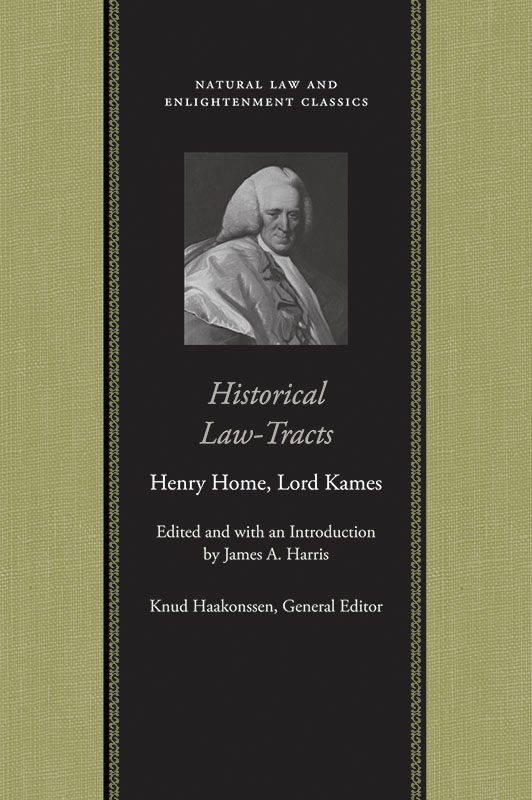