Discovery, Capitalism, and Distributive Justice makes Kirzner’s case for the idea that entrepreneurial profit is both essential for an economy and profoundly just. Asserting that the problem with standard criticism of capitalist income distribution is a failure to see capitalism as a “discovery procedure,” Kirzner argues that production and subsequent profit are neither automatic nor guaranteed.

This important contribution to the larger debate of the capitalist system clarifies core economic issues, so that the positive science of economics can enlighten our understanding of justice in capitalist distribution. Successful production always results from the discovery of an opportunity to obtain new gains from trade, i.e., the discovery of entrepreneurial profit. Kirzner shows that profit is the just and fair possession of its discoverer. This is what he calls the “finders-keepers” rule: “The finders-keepers rule asserts that an unowned object becomes the justly owned property of the first person who, discovering its availability and its potential value, takes possession of it.”

Richard Ebeling reviewed the work in 1989, saying, “the heart of Professor Kirzner’s argument is that every discovery of a new opportunity is the appropriation of that which had not existed before a human mind had seen the potential in that object.” Kirzner’s monograph is complemented here by three important articles on the subject of economic justice, a critique of Kirzner’s theory, and a reply from Kirzner to that critique.

Kirzner’s finders-keepers rule of entrepreneurial profit and market distribution stands as one of the foremost defenses of the distribution of income and profit in the free-enterprise system.

Frédéric Sautet is Associate Professor at The Catholic University of America, School of Business and Economics. He is a specialist in Austrian market process theory and teaches entrepreneurship studies. He has taught at George Mason University of Paris Dauphine. He is the author of An Entrepreneurial Theory of the Firm and has published widely on entrepreneurship. 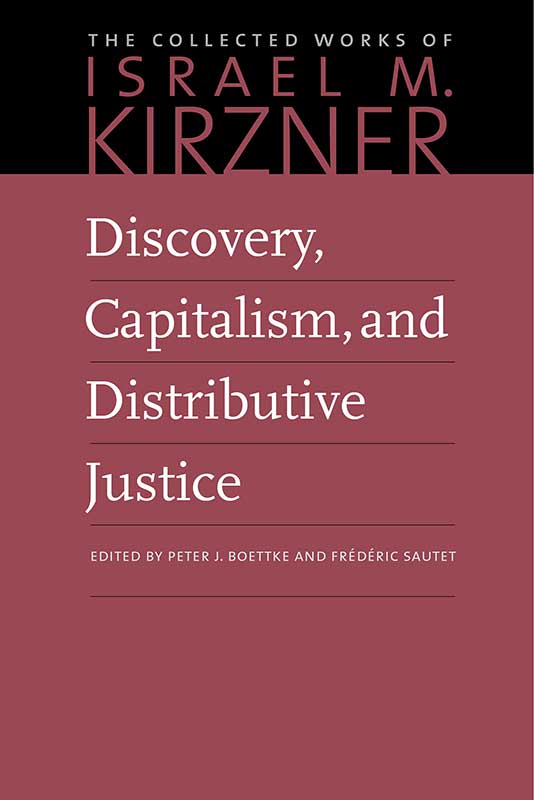 Introduction to the Liberty Fund edition, five previously published articles not in the 1989 Blackwell edition, index.